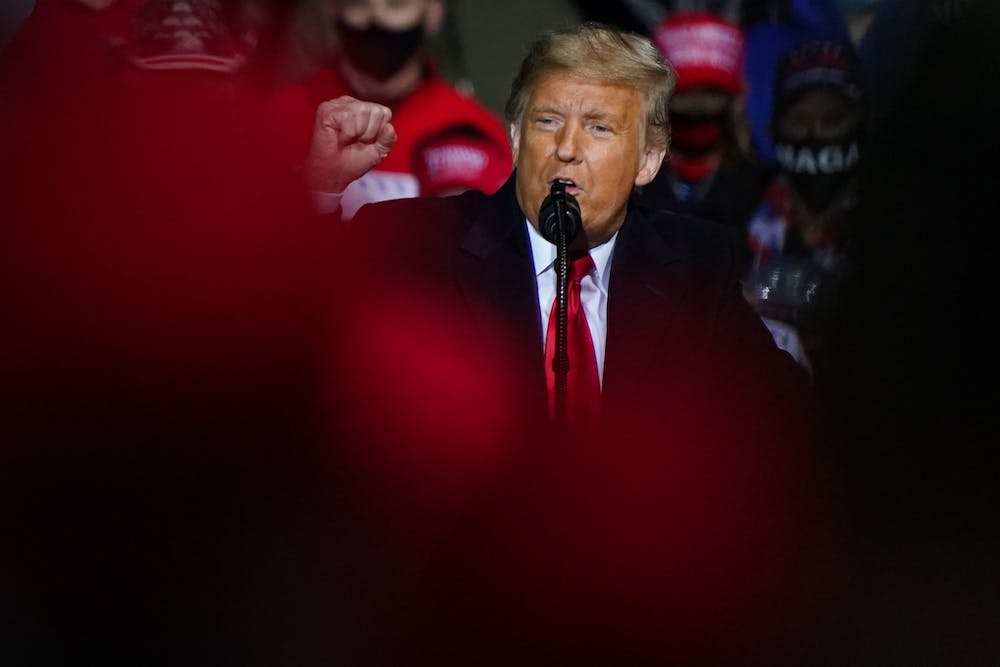 The request comes months after Provost Wendell Pritchett rejected a request in July 2020 from six Wharton professors — including Orts — demanding that Penn President Amy Gutmann investigate the allegations made against Trump, stating that the "situation occurred too far in the past to make a useful or probative factual inquiry possible."

Sheller, a 1960 College graduate and 1963 Penn Law School graduate, had also written a letter to Gutmann and Board of Trustees Chair David Cohen in July requesting an investigation into Trump’s admission into Penn, but did not receive a response.

Now that Trump is no longer in office, Orts and Sheller are requesting that the University reconsider its initial dismissal of the investigation and begin an investigation of the former president’s alleged fraud under the Policy Regarding the Revocation of Degrees. This policy outlines the process to be followed when a question arises as to whether a past degree granted to a student should be revoked, typically due to a discovery of information that creates a question about the validity of the degree that was granted.

"There is nothing new to say on this beyond what was reported in [The Daily Pennsylvanian] back in August," University spokesperson Stephen MacCarthy wrote in an emailed statement to the DP regarding Orts and Sheller's recent request. Pritchett did not respond to multiple requests for comment.

In the Feb. 18 open letter, penned to Gutmann, Pritchett, and Wharton Dean Erika James, Orts and Sheller referenced Trump’s recent acquittal by the Senate from incitement of insurrection and his spreading of falsehoods regarding the election.


“Trump was well-known throughout his term for acting vindictively against anyone who crossed him — even members of Congress and his own vice president. Trump would likely have lashed out at Penn and Wharton too, perhaps with great cost to some students and Penn’s financial well-being, had you proceeded at that time with an investigation into his alleged admissions fraud,” Orts and Sheller wrote in the letter. “Now, however, Donald Trump is no longer president, and any expected negative consequences that may have stayed your hands in the past have disappeared or at least been substantially reduced.”

The recent letter also noted that, while Orts and Sheller speculated that the University’s initial decision to remain silent may have been precautionary, minding potential negative consequences on Penn’s finances or students, these potential effects of beginning an investigation have diminished with Trump out of office.

Orts told the DP that, although Trump's presidential term has ended, he believes that Trump's influence and following is still significant enough that the University cannot ignore its connection to the former president.

Following his acquittal in his second impeachment trial, Trump has reportedly considered launching a new political party and has raised more than $200 million since Election Day. A recent Harvard CAPS-Harris Poll found that a "narrow majority" of Republican voters say they would support Trump as the 2024 presidential nominee for the Republican party.

“That's really why we're raising it up again – [Trump’s] no longer president now. It’s not like he's disappeared from the planet, though, and it's not like the Trump movement has suddenly disappeared either,” Orts said. “[Trump] is still a threat in that he creates a public danger to the truth.”

The letter also noted that in June 2020, Pritchett's response mentioned that the University "will continue to be open to investigating" the allegations if new evidence regarding Trump’s admission situation were to surface.

The allegations that Trump cheated to gain admission to Wharton as an undergraduate transfer student began upon the publishing of a tell-all book written by Trump's niece, Mary Trump, titled "Too Much and Never Enough," published on July 14, 2020. She had written that Trump paid another person, named as Joe Shapiro, to take his pre-collegiate exam, the SAT, for him, which he used when transferring from Fordham University to Penn in 1966.

Since the Wharton professors’ request last year, The Washington Post published secretly taped conversations with Trump’s sister, Maryanne Trump Barry, in which Barry made comments indicating that she likewise believes Trump had someone take his SAT for him in order for him to gain admission to the University.

Get our newsletter, Dear Penn, delivered to your inbox every weekday morning.

“Failing to investigate Trump would signal that one can cheat in the admissions process at Penn and Wharton, and get away with it as long as you are famous, come from a powerful family, or are a prospective big donor,” Orts and Sheller wrote in the letter. “An investigation would show that everyone must follow the rules no matter who you or your parents are.”

Orts said he believes that the decision to launch this investigation is a moral issue that creates a question of the integrity of the University. He also noted concerns about Penn’s reputation in the long term, should the University fail to begin an investigation.

“What is it going to look like for the University of Pennsylvania to go down in history as having done nothing [to investigate Trump’s alleged fraud]? We may have been complicit in what is probably going to be the worst presidency in American history," Orts said.

Financial reasons cause an uncertain future for...

Here are four reasons you should switch to...